Here are a few tidbits of information concerning the rivalry, things you probably didn't give a thought about, but now that you know them, you probably feel a little better about yourself.

--The J. Lawrence Walkup Skydome (originally called the Ensphere), on the campus of Northern Arizona University, opened in September 1977 and began hosting high school and college games, including the rivalry game, that same autumn.  In previous years, it was played at Lumberjack Stadium and, in 1975 and 1976, Cromer Stadium at Coconino High.  Flag High has never hosted the rivalry game. 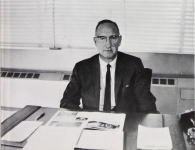 --Sturgeon Cromer, superintendent of public schools from 1947 to 1971, lends his name to both Cromer Stadium and the Cromer Awards, given to the outstanding player from each school in the rivalry game from 1971 to 1976.

--While the game has become an end-of-season tradition, it was played at the start of the season the first five times.  Flag High played in Class AAA prior to 1974, which meant the two teams played in different conferences (Coconino began play in 1968 in AA).  Once Flag High made the move to AA, the two schools thereafter always played in the same conference and division.  Because high schools and colleges traditionally play conference games at the end of the season, the schools played each other at the start of the season during their non-conference schedule.

--As of this writing (2/11/13), a game record page is in the works, but only 37 of the 43 games have been fully recorded and it is therefore incomplete; it is enough, however, to present trends.  The top rushing performances are dominated by Eagles runningbacks, with Caesar Polk running for 260 yards in 1991.  Though offenses traditionally run the ball in this game, Coconino is the more likely of the two to have an occasional passing attack; as a result, passing stats favor the Panthers, with Audie McKee passing for 354 yards in the 1983 game, 230 to Phillip Miller.

--In the eleven seasons (1974-1984) the two teams competed in the old AA North, they combined for seven division titles and five Class AA state championships.  The two teams combined for a .773 regular season winning percentage, with Coconino sporting an 80-24-3 record, Flag High going 83-22-2.