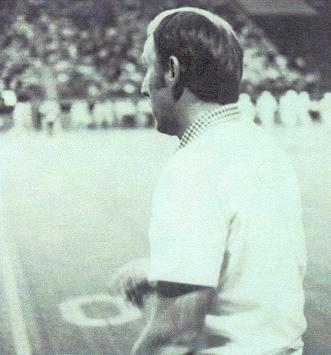 LEADING IN:  Starting in 1978, the Class AA playoffs brackets were expanded.  Past seasons saw only division champions qualify for the postseason, which often meant some very fine Eagle and Panther teams were left out.  This year, the rivals were both sitting at 8-1 by the time of their annual duel in the Dome, #1 and #2 in the AA North.  Both teams were assured a place in the playoffs.  The winner would claim the division title and host next week in the Dome, while the loser would be on the road in the first round.  Though the usual city championship trophy and bragging rights were at stake, much more was riding on this game, and its result would have a definite impact on the rest of the state. 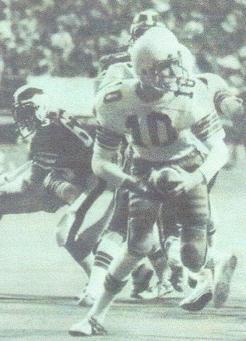 THE GAME:  Though the Eagles dominated the game statistically, the Panthers grabbed a 21-0 lead in the second quarter and held on for dear life as the Eagles chipped away at the lead, little by little, until the very end.  With the ball deep in Coconino territory and 24 seconds left on the clock, Ray Hernandez and the Flag High kicking team lined up for a 32-yard field goal, but it was tipped at the line of scrimmage, and it sailed wide.

The Panthers breathed a collective sigh of relief in getting past their archrivals, and Coach Bill Epperson gave the Eagles all the credit in the world.  According to Flag High coach Hadley Hicks, “When the game ended I walked to meet Coach Epperson and the CHS coaches to congratulate them on a great game.  The CHS coaches showed a lot of class.  They told me that we should have won.  We completely outplayed the Panthers offensively.  Had it not been for a couple of FHS turnovers we would have won handily.  I was proud of our kids.  We did not get down on ourselves when we made mistakes.  We hung in there and had a chance to win.  God just had other plans.  I encouraged our kids to come back to practice on Monday ready to “get after it” again.  We had one more game to play.”

AT THE END OF THE DAY:  By virtue of tonight’s win, Coconino won the AA North and had the honor of hosting defending state champ Canyon Del Oro.  Flag High went on the road to face Gilbert, and again, they lost in a heartbreaker, 14-13 in overtime.  overtime rules dictate each team gets one possession, and the team gaining the most yards gets a point and the win; Gilbert beat Flag High by one or two yards, depending on the source you consult.  It was Coach Hicks’ last go-round with the Eagles, his assistant Larry Gray taking the reins in 1979.  The Panthers, meanwhile, squeaked past CDO in another nail biter, this time by a 9-6 score as Art Kerrick booted a 31-yard field goal with six seconds left.  Their luck ran out the next week in the semifinals, as they came out flat against Tolleson and lost, 28-0.

Content derived from anecdotes and articles from the Daily Sun ()