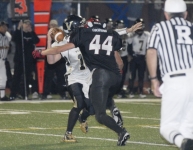 LEADING IN:  2010 was perhaps the darkest year in high school football history.  Sinagua High was closed down due to budget cuts after the ’09-’10 year, making 2009 the last year the Mustangs would field a team.  Coconino came to the Rivalry Game at 2-7 (1-2 in Grand Canyon Region play), but Flag High was even worse at 0-9 (0-3 GCR).  The combined two wins were not only the lowest win total ever coming into the annual season finale, their combined sixteen losses were largely not competitive at all.  Coconino, for instance, had given up 308 points in their nine games while only scoring 130 themselves.  The Eagles had scored all of 59 points and had given up a whopping 435, and the scores were ugly.  Versus Thunderbird, the score was 61-6; Williams Field, 61-0; Cactus Shadows, 61-0.  The least lopsided loss was to Page, a team Flag High traditionally whips, 39-12.

The Panthers were on the slow upswing after bottoming out themselves in 2007 and 2008, an era where they could only muster one win in 20 games.  Coaching instability continued at Flag High; Kevin Kortsen took the reigns as head coach with former Sinagua patriarch Eddie Campos looking over his shoulder.  To his credit, Kortsen didn’t quit on the Eagles (as Erik Affholter did in 2007), but it was clear his team was simply overmatched in every game they played.

The Rivalry Game, however, came to be the saving grace for both teams, a chance to save a little face in a season marked by disappointment.  The Eagles had won the previous five meetings against their crosstown rivals, most of them of the blowout variety.  For Flag High, the desire to chalk up at least one W for the season was motivation enough; for the Panthers, defeating their nemesis after so many consecutive losses to them kept them hungry.

THE GAME:  The start of the game was indicative of how the two teams played throughout the season.  Flag High signal caller Rhyan Robertson was knocked out of the game on the third play from scrimmage on a sack by Justin Gahr, giving quarterbacking duties to Sam Shanahan.  The Eagles turned the ball over a whopping four times in just a little more than the first quarter, including two interceptions by Shanahan, but the Panthers proved unable to capitalize until turnover #4; Coconino DB Wally Brzenskie picked off Shanahan and returned it 14 yards, setting up the Panthers’ first score, a 12 yard pass from Casey Sifling to R.J. Garduno on fourth-and-goal, making the score 7-0 in the second quarter.  The Eagles went three-and-out on their next series, shanked a punt, and the Panthers were in business again, this time on the Flag High 27; it took Sifling just one play to get the Panthers in the end zone again, this time firing a pass to Timmy Teran.

Already down 14-zip with the second quarter winding down, the starting QB out and the backup ineffective, Kortsen looked to sophomore Montana Membery to take the reins of the offense.  Membery took a snap, faked a handoff, took off down the wide-open right side of the field, and flew for 64 yards.  Two plays later, he hit Dylan Short from six yards out to get the Eagles on the board before the end of the half; the Hunter Dixon extra point meant Flag High only trailed the favored Panthers 14-7 at intermission.

The Eagles hung tough in the third quarter.  They took advantage of a Coconino miscue as a long snap skipped to the punter, nixing a punt attempt and giving the Eagles the ball at the Panther 47.  From this spot, Membery again whipped around the end, found nothing but open field, and ran in for the touchdown.  ’s point-after try was blocked, but the Eagles, hungry for a win, were down by just a single point, 14-13, heading into the fourth quarter.

The Panthers wore the Eagle defense down in the final stanza.  On a drive that included twelve straight running plays, Gahr topped it off with a two-yard surge into the end zone.  Luke Daulton, who led Coconino with 91 yards rushing, scored a touchdown as well.  Sifling tossed his third touchdown pass of the night, again to Garduno, to end the scoring for the night.  While the Eagles played their hearts out, they seemed to have simply run out of gas.  Their offense had nothing left, the Panther D shut them down, collecting six sacks on the night (3.5 by Gahr).

“We knew we were going to try to win this in the third and fourth quarter and just wear them down,” Coconino head coach Tadd Ragan said of their strategy.  “That was our plan and I think the score reflects that.

AT THE END OF THE DAY:  The Panthers ended 2010 at 3-7 (2-2 GCR), good enough for third place in Grand Canyon Region play.  Flag High suffered through their first winless season since 1968, the season before the rivalry began.  Kortsen coached his only game in the series, and though it was a loss, it proved to be his most competitive game at the helm.

While 2010 can certainly be considered the worst season in the history of prep football in , hope springs eternal, and there’s nowhere to go but up from here.

Original story by Jacob May for the Daily Sun;