LEADING IN:  Wanting to build on 2015’s 5-5 season, the Eagles were looking to Head Coach Dave Dirksen to maintain stability in the coaching ranks.  Dirksen, however, took over the FUSD superintendent position on a temporary basis; instead of looking for a new head coach in the offseason, Flag High chose to go with co-coaches, Paul Wolf and Bob Castillo, to keep Dirksen’s seat warm in his absence.  While it left the possibility of Dirksen resuming his coaching duties, it did mean the Eagles would be going through their tenth head coach (depending on how you count) in eleven years.  Wolf and Castillo promised no radical changes to Dirksen’s design, continuing the philosophy of “One Heartbeat:  The Power of One” and relying a heavily-senior roster (31 seniors) to carry them through. 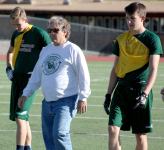 While the Eagles would be relying on on-the-field experience to get them through, Jeremiah Smith and his Panthers were going young.  Senior David Quick would be leading the team on both sides of the ball, and Christian Casados would be running the offense, but nearly the rest of the team would be underclassmen.  Having folded their JV team during the summer, plenty of sophomores competed for starting positions.  Surely it will pay off down the road, but success in ’16 would mean finding a level of consistency and building on a few successes.

And the Panthers did have a few successes to build on.  After giving up two touchdowns in the first half to Page in the opener, Coconino’s D tightened up, Casados proved himself a scrambling quarterback who could think on the run, and the Panthers eked out a 15-12 win in overtime.  Losses to Greenway and Payson set the team back, but the Panther offense had a record-breaking performance in their 54-48 win over Mohave; Quick’s 340 yards rushing not only broke the school record, it’s the most anyone from Flagstaff, on any level of recorded organized football (including NAU), had ever gained, and oh, by the way, he also made plays all over the field on defense.  Hopes were high in Pantherland after they played Top Ten Bradshaw Mountain tough and tight through three quarters before eventually falling to the eventual Grand Canyon Region champs, but losses to Prescott and Mingus left them at 2-7 heading into the season finale.

Flag High had their offense churning from the get-go.  A heartbreaking 51-50 loss to Coronado at the Skydome got their season going, and after rattling off three big wins in a row, it looked like they could score points at will.  While Christian Singleton was playing his third full season as their starting quarterback and it showed, the big news of the first half of the season was Tim Dana, who was on the receiving end of many a long Singleton pass, threatening school records as he went; the two balanced an offense still predicated on the run, and seniors Austin Rhoda, Gavin Randall, John Switala, and Jared Wetzel ran hard all season.   Their winning streak snapped after a defensive battle with Bradshaw Mountain (don’t let the 28-7 final fool you, the game was 7-7 after three

quarters), and they played tough against Thunderbird the next week.  Beating Lee Williams seemed to get them back on track and back over .500, but Mingus and Prescott brought them back under, and they came to the Skydome to face Coconino with  4-5 record.

While playoffs weren’t on the line this time around, both teams eyed the City Championship Trophy with their usual zeal.  Would Singleton and the Eagles be too much for the young Panthers, or would Quick’s speed and sheer will carry Coconino through?

THE GAME:  Turnout for the Rivalry Game was better in 2016 than it had been since the city went back to two public high schools.

The Eagles got on the board first.  After halting the Panthers’ opening drive and taking the punt, they drove and scored on their first possession by way of

Coconino had plenty of life in them, despite being down quickly.  Between Ty Furr’s solid returns, solid running by Quick and the occasional smart shuffle pass to Zach Christopher, the Panthers were able to move the ball.  Early on, however, the Eagles’ defense flexed its muscles, registering two sacks, a batted pass, and a partially-blocked punt that set their offense up on the Coconino 20 as the first quarter came to a close.

Flag High quickly converted the miscue into a touchdown via two solid runs by Singleton, one for ten years, then another for seven that got him into the end zone.  Opting for two again, opting for the pass again, Singleton found Wetzel for the conversion.  With 10:21 until halftime, the Eagles were up 16-0 and looking to put the game away early.

At that point, the Coconino offense woke up.  After a kickoff went out of bounds and the Panthers set up shop on their 35, they needed two big plays to get themselves on the board; Quick’s 29-yard run got the Panthers in Eagle territory, and then Casados threw a picture-perfect pass to Nathan Randall on the post pattern for a 41-yard catch-and-run into the end zone.  Casados’ extra point was good, and suddenly the Cats were back in the game, 16-7.

It took the Panthers just one minute to score; it took the Eagles 1:18 to answer.  After a terrific return by Wetzel (Casados, the kicker, saved the touchdown), Flag High started on the Coconino 21.  Gavin Randall’s 16-yard run got the ball down to the five, but the Coconino D stiffened, sacking Singleton and moving them back to the eight.  Then came perhaps the signature play of the game; with Singleton stepping back to pass and the Panther defense bearing down on him, he threw off his back foot at the moment of contact a 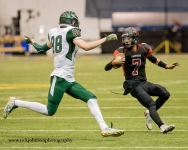 nd found George Faull in the end zone, all 6’5” of him, needing every inch of that frame and those long arms to rake in the pass.  The failed conversion left the score 22-7.

The Panthers had one more big play in them in the second quarter, a 62-yard touchdown gem by Quick that started off left tackle, then cutting back across the field, nobody catching him.  It was looking, with both offenses starting to click, that the game would start to be a shootout; not even halfway through the second quarter, and the Eagles were up 22-14.  Though the Panthers had momentum, they were unable to cash in the rest of the half.  They held the Panthers to three-and-out, but couldn’t convert on opportunities.  Sophomore Dawson Buckley grabbed a Flag High fumble, the first turnover of the game, and Casados had the Panthers moving after a 10-yard pass to Ty Furr, but the Eagles stopped them with a sack.  Flag High was up, but Coconino was right there with them.

Trying to catch the Eagles asleep, the Panthers opted to start the second half with a squib kick.  After a great deflection and hit by Weston Atwater, Singleton launched a bomb that was caught by Duwula Joseph for a 57-yard touchdown.  Having attempted two-point conversions the entire first half, the Eagles chose to kick them in the second, and when Mark Cardenas hit it, they were up 29-14, Coconino’s momentum was gone, and they pressed on.

Zach Christopher’s 22-yard run again got the Panthers on the Eagles’ half of the field, and it became the routine for the rest of the night; Coconino was able to move the ball effectively until they got around the Flag High 30.  George Faull sacked Casados (Faull had three sacks on the night, nine total for the team), forcing the Panthers to try a 48-yard field goal; Casados has the leg for such a long kick, but this time it was short and to the right.  After forcing the Eagles to punt, the Panther offense started to press, first with a gadget play (a throwback to the QB that went incomplete), then, on 4th-and-6 Casados tried a pass and had it intercepted.  The Eagles took advantage of a couple of solid runs but failed on their own 38-yard field goal attempt.  Coconino took over, and after good runs by Quick, Christopher, and Casados, they were again in Flag High territory, and again the Eagles halted the drive, this time with Faull batting down a midscreen

The Eagles salted the game away in the fourth quarter, starting with a 53-yard strike from Singleton to Dana.  After recovering a Panther fumble, the same duo connected again, this time for 31 yards to get the ball down to the 1, where Wetzel converted.  The Coconino offense didn’t roll over, David Quick and Zach Christopher continued to run hard (Christopher had 98 yards in offense to compliment Quick’s 172), but Dana picked off Casados and raced 60 yards to set up Flag High’s final score of the night, a 14-yard trot by Singleton, who won this year’s John Ply Memorial Award and, a month later, the Arizona Daily Sun’s Football Athlete of the Year for 2016.  Quick won the Bill Epperson Award for being the Outstanding Panther of the game.

AT THE END OF THE DAY:  While the Eagles finished .500 or better for the fourth time in five seasons, they still weren’t able to break through into the upper tier of the Grand Canyon Region, dominated in recent years by Bradshaw Mountain, Mingus, and Prescott.  Coconino finished below .500 for the fourth straight year, and they seem to be struggling with the same three opponents Flag High is, year in and year out.  Coconino may have an edge over Flag High for 2017 in terms of returning lettermen, but both teams have high hopes for the rest of the decade, as both freshman teams had excellent seasons, only one loss between the two of them (only because they had to play each other).

Statistics from the Arizona Daily Sun and MaxPreps