The Flagcoco Spirit Awards were started at the end of the 2015-2016 school year to celebrate the athletes who participate in the best high school rivalry in Arizona.  Each year, a senior boy and a girl from each school is honored for their athletic achievements and sportsmanship throughout their high school careers.

While members of the Flagstaff media and the school athletic directors are consulted, Flagcoco has the ultimate call.  Criteria for choosing honorees include:

*Must be a senior.

*Must have competed in at least one sport as a Panther or an Eagle.  Multisport achievement holds greater weight.

*Winners of the New Cromer Awards (another set of awards presented by Flagcoco) are not excluded, but are shied away from.

*Raising level of play in rivalry competition a plus.

​The fourth annual Flagcoco Spirit Awards were held May 20, 2019 at the Hal Jensen Recreation Center. 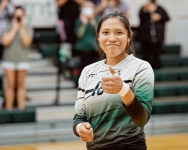