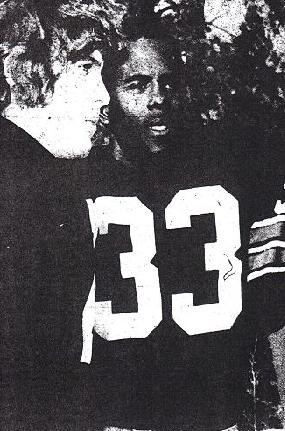 LEADING IN:  Winslow had beaten both Coconino and Flag High and clinched the AA North championship, but that should not be seen as proof that the two Flagstaff teams had poor seasons; quite the contrary, the Eagles (8-1) and Panthers (6-2-1) were fighting it out for second place in a very competitive division.  Both teams were using Cromer Stadium as their home field, and neither had lost there all season (the Panthers hadn’t lost a home game since 1973).  Something had to give.  Coconino was averaging 211 yards a game on the ground, led by senior phenom Willard Reaves; though he rushed for 103 yards in the ’75 rivalry game, he only gained three in the second half, and the Eagles won, 22-6.

THE GAME:  Flag High took a tenuous 7-0 lead to the locker room, having slowed the vaunted Panther offense to a crawl.  In the previous seven games of the series, the first team to score won the game, which gave the Eagle faithful at an over-packed Cromer Stadium that much more confidence.  This year, however, the second half was the Willard Reaves show, in which he scored four touchdowns and rushed for a game high 220 yards.  Three costly Eagle turnovers in the third quarter, including two fumbles by tailback Kelvin Gill, only added fuel to the fire.  Gill redeemed himself with a spectacular 95-yard kickoff return for a touchdown in the fourth quarter to keep the Eagles in the game, but the Panthers’ running attack was just too much, rushing for nearly 400 yards and gobbling up most of the second half (the Eagles managed just one three-and-out drive in the third quarter).  To no one’s surprise, Reaves took home his second Cromer Award, while Danny Cox had the honor for the Eagles.

AT THE END OF THE DAY:  Tonight’s game was Reaves’ last as a Panther, and it was a great one, breaking 2,000 yards for his prep career; though he missed his chance to eclipse Ray Smith’s single-game Panther record of 247, he wasn’t disappointed:  “You just can’t be greedy.  I am just glad to beat .”  He moved onto , where he starred as an All-Big Sky runningback, then to the professional ranks with the Winnipeg Blue Bombers of the Canadian Football League; in 1984 he helped the Bombers win the Grey Cup and, in the process, won the CFL’s Most Outstanding Player Award.  In 1989 he tried his hand at the NFL, first with the Miami Dolphins, then the Washington Redskins.  As of this writing, he and his family live in .