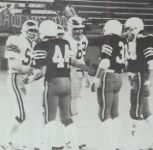 LEADING IN:  There were plenty of reasons to come by the Dome tonight.  The Panthers were ranked #2 in Class AA, taking on the defending state champion Eagles.  Solid offenses, suffocating defenses, and some of the best coaching in the state were the norms for the two teams, and in 1982 they were again at the top of the AA North standings.

Coconino was ranked #2 in the state, and for good reason.  They were hot on offense (averaging just under 30 points a game, second only to top-ranked Flowing Wells) as well as defense (giving up just 35 points all season).  They had the requisite running game, led by Jay Cox (765 yards and 12 touchdowns in eight games), but also a refined passing game.  Junior quarterback Audie McKee completed 56% of his passes, tallied 1,183 yards, and threw 12 touchdown passes without a single interception.  McKee’s primary target was Mark Cibik, a true deep threat who averaged 23 yards a catch and scored ten times.  Only a season-opening loss to eventual Class A champion Snowflake kept the Panthers (7-1) from an undefeated season.

Flag High was 6-2.  After four games, they were sitting at 2-2, suffering losses to Page and Snowflake.  Since then, they’d been on a tear, winning four straight by a combined score of 111-16.  They had their own set of stars, with senior fullback George Pryor (496 yards,13 TD’s) and junior tailback Tim Gill (638 yards, 4 TD’s) leading the ground attack.  Vinny Zanzucchi ran the offense, throwing for 792 yards and five scores to the likes of Daniel Casados and David Hellod.  It was an offense scoring a shade under 26 points a game, and it matched a defense giving up just under 12.

Both teams were sporting 4-0 marks in conference play, which meant tonight’s game would determine the AA North as well as the city champion.  The Eagles hadn’t lost a conference game since 1979; Coconino lost just two in that span, both to Flag High.  This was Panther coach Steve Maier’s third Rivalry Game as their head man and had yet to beat the Eagles; it was also the third go-round for Flag High’s Rick Smith and had yet to lose to the Panthers.

THE GAME:  The Panthers announced their presence with authority, as they put points on the board just one minute into the game.  Flag High tried a little razzle-dazzle to catch the Cats off guard with a hook-and-lateral play; Zanzucchi’s throw to Hellod was good, but the pitch to Gill was snatched away by Coco DB Greg Reiff.  That set up Coconino deep in Flag High territory, where McKee found Cibik for a 22-yard score.

Moments later, McKee threw another gem to Cibik, this time a 43-yarder, an acrobatic reception on the sideline, that put the Panthers on the FHS 1.  McKee pushed it in from there.  On the extra point attempt, McKee (also the holder) jumped to his feet, rolled right, and found Dolby in the back of the end zone for two points.  Just barely halfway through the first quarter, the Panthers were up on the defending champions, 15-zip.

While McKee and Cibik were carving up the Eagles’ defense, Pryer and Gill were finding out just how tough Coconino’s D was.  Their usually potent running game could only muster 64 yards on 29 carries all night, which meant, if the Eagles were going to move the ball, they’d have to go through the air, especially being down by two touchdowns so quick.  Throwing from the shotgun, Zanzucchi spread the ball around and was surprisingly effective.  They put a drive together that gobbled up six minutes and converted a fourth-down on a Zanzucchi-to-Hellod connection that set them up on the Coconino 2.  The Panthers stiffened; led by Dolby and Alex Acosta, they threw Gill and Pryer for losses, and on fourth down they held Zanzucchi out of the end zone when he tried to cash in on his own.

Lightning struck one last time for the Panthers before the half ended.  On the scramble, McKee found Cibik on a hitch-and-go pattern for a 37-yard touchdown with 17 seconds left.  The shellshocked Eagles went to the locker room, down by three scores, and it looked as if their three-game winning streak against the Panthers was emphatically coming to an end; they couldn’t stop McKee, nor slow down Cibik, and though they could drive on them, the Panthers’ defense proved they could bend without breaking.

The Eagles didn’t roll over in the second half.  They put together another drive late in the game, starting at their own 25.  With the help of a successful fake punt, a penalty, and two clutch fourth-down conversions, they had first-and-goal on the CHS 4.  Again, Coconino rose to the challenge, as Zanzucchi threw three incompletions to end Flag High’s last best chance to get on the board.

McKee only completed three passes all night, but they were all golden, all to Cibik.  The duo connected three times for 103 yards and two touchdowns.  Between his arm, his feet, and his wits, McKee accounted for 20 of Coconino’s 22 points.

As of 2013, the 1982 meeting is the only time Coconino has ever shut out Flag High.  The Eagles have blanked the Panthers four times.

AT THE END OF THE DAY:  The Panthers hosted in the first round and won, 17-7.  Two long McKee touchdown passes, a 55-yarder to Cibik early in the game, and then a 40-yard pass to Mike Dolby in the third quarter, put the Cats on top.

They then traveled to to play the #1 Flowing Wells Caballeros, led by Flag High’s former head coach Larry Gray, at in the semifinals, and for three quarters, things were looking good for Coconino.  They got on the board quickly, thanks to Johnny Chavez’s 38-yard pick-six that put the Panthers up 7-0 just into the game.  The Caballeros got the points back on their next possession, ramming the ball down the Panthers’ throats, capping the drive with two-yard plunge by tailback Kevin Jones (he would end the day with 195 yards rushing) .  Undaunted, Coconino came right back, driving to the Flowing Wells one-foot line; on fourth down, they settled for a field goal attempt, which should have been a piece of cake for Herik Mandel, but though he hit the chipshot, a penalty moved the ball back to the 15, turning a 17-yard freebie into a 32-yard effort, which Mandel then missed.  Aside from Greg Reiff’s 46-yard interception return that put the Panthers on the Caballeros’ 20, neither team could muster a threat the rest of the half.  In the third quarter, the Cats put together another solid drive, only to fumble the ball away on the Flowing Wells

4; from there, the Caballeros put together a 96-yard drive, finalized by QB Ken Leikem finding TE Ron Collins for a 19-yard score.  After another fumble, this time on a punt return, Collins kicked a 32-yard field goal, putting Flowing Wells up 17-7 with left in the game.  The Panthers did not quit.  McKee pushed the offense down the field quickly, finding Dolby and then Cibik for a 19-yard score that made the score 17-14 with just remaining.  They got the ball back one last time, with just 59 seconds left, and McKee again led the Panthers downfield with passes to Cibik and Cox, but with 25 seconds left, looking for Cibik on a deep corner pattern, the receiver was double-covered, and McKee did something he only did twice all season prior; he threw into double-coverage and was intercepted, killing the Panthers’ final rally.

Flag High played the Marana Tigers in the first round.  Though both offenses were rather stagnant all night, the Eagles took a 17-0 lead into the fourth quarter, thanks to hard running by Pryer and Gill and a 35-yard INT return for a score by Joel Lacey.  Tons of mistakes, though, kept Marana in the game, including losing five of seven fumbles; the Tigers, just as mistake-prone as the Eagles, couldn’t capitalize.  Marana didn’t get on the board until late, when Zanzucchi recovered a punt snap that sailed over his head in the end zone for a safety.  On the ensuing free kick, the Tigers took over at midfield and drove, quarterback Fred Altamirano finding Will Laborine for an 18-yard score and then John Butler for a two-point conversion.  That’s as close as Marana could get as the Eagles managed to eat up most of the rest of the clock and stave off Altamirano’s desperation passes for a 17-10 win.

They played their own semifinal game at Dobson High against .  Pryer wrecked the Patriots’ hopes on both sides of the ball; on offense, he ran for 122 yards and a touchdown against a defense boasting the ability to shut down the Eagles’ running attach, and on defense, he and the Eagles limited the Patriots to 110 yards of total offense.  Independence got on the board in the mid-fourth quarter on a fluke play, backup QB Mario Bravo’s pass tipped by Hellod, caught by Patriot receiver Jeff Bowen, the ball popping out and ending up in the hands of Mike Greer, who raced to the end zone for a strange 32-yard score; they tried the two-point conversion, but Bravo’s pass fell short, and the Eagles prevailed with a very tough 7-6 win.

Had McKee found Cibik on that deep corner route, it might have been Coconino and Flag High playing in the championship game.  Instead, the Eagles faced undefeated Flowing

Wells, and Rick Smith faced his former boss, Larry Gray.  Instead of being an offensive affair that would have favored the high-scoring Caballeros, it was defense that dominated.  Flowing Wells committed five turnovers, three of them interceptions by Daniel Casados, who saved his best game for when it counted most.  Even with all their mistakes, the Caballeros were up, 7-3, with two minutes remaining.  At that point, the Eagles’ offense came alive, with Zanzucchi willing the team down the field, going 50 yards in seven plays.  With 41 seconds left, he connected with Casados for a 13-yard score that put the Eagles up, 10-7.  Casados finished the game with 89 yards off of five receptions.  Caballeros QB Ken Leikem tried to spark one last feat of magic, but Pryer intercepted him, giving the upstart Eagles their second straight title.

Original story by Jay O’Callaghan of the Daily Sun;