LEADING IN:  2014 was a season of transition.  Both George Moate and Eddie Campos left their respective programs shortly after last year’s Rivalry Game.  Coconino replaced Moate with a familiar face, Jeremiah Smith, who had coached the varsity Eagles just a few years prior.  Flag High’s new man at the helm was Robbie Rusconi, whose last post was as defensive assistant at Coconino.  Both gentlemen had challenges facing them going into the season.  Was Smith going to do what Moate didn’t really do and decide once and for all if Cristo Tabares or Jess Kuehl was going to start at quarterback?  How was Rusconi going to replace all the seniors who graduated in May and their collective leadership? 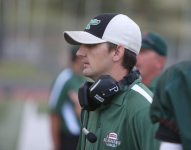 Injuries were a nagging theme.  Flag High was feeling it before the season started, calling up at least six JV players before the opener against Central.  As the season went and Varsity continued to rely on JV to fill the roster, they got to the point where the JV team was so depleted, they ended up dissolving the team.  Coconino had their own health issues, from the tick-borne fever of Camp Colton to a rash of concussions, starting with speedy wideout Marcus Baca Martinez.  While every team has its share of obstacles to overcome, the two teams were certainly frustrated by the injuries that cut into their depth.

Flag High started off the same way they did 2013, with a win in the Skydome against Central; the previous year, however, the Eagles dominated the Bobcats, 61-0, while the ’14 edition eked out a 21-18 win.  After that, offense was tough to come by for the Eagles, scoring 48 points in the next seven games, all losses.  While soph QB

Christian Singleton was at the helm, he was gaining valuable varsity experience, even with key weapons like senior Zach Olson in and out of the lineup.  They halted their skid with a gritty 6-0 win over hapless Kingman, sending them to the Rivalry Game at 2-7.

Peoria), they started off 0-3.  Kuehl took over the offense when Tabares got hurt and did better, leading the Panthers to wins over Mohave and Kingman.  That boosted their morale, but four more losses ended their momentum, and they too went to the finale at 2-7.

A sign of the times came on October 3, 2014.  On that night in Prescott Valley, Bradshaw Mountain handed Coconino their worst loss in school history, running up the score (playing the starters into the fourth quarter before their AD told the coaches to knock it off) to 68-0.  At the same time, at Cromer Stadium, the Eagles were suffering one of their worst losses in ninety-plus years of varsity football, losing to the Mingus Marauders, 63-13.  As far as this writer is concerned, it was the worst night in the history of Flagstaff high school football.

There were also bright spots in the season as several heroes emerged.  Zach Olson proved to be a triple-threat for Flag High as he excelled rushing, receiving, and returning kicks.  Nick Christopher became more reliable running the ball as the season wore on.  Singleton was maturing.  Austin Rhoda made big plays.  For Coconino, Ray Crank was running hard as always, Jacob Hughes and David Quick became Kuehl’s favorite targets, and Weston Smith and Cesar Andrade emerged as a linebacking duo to be reckoned with.  The biggest playmaker for either side was Coconino’s Fabian Lucero, who surprised several foes with his speed, returning four kickoffs for touchdowns; this not only led the state (regardless of division), but may have led the entire nation.

In other words, despite the records and the injuries and the growing pains, there was still something to cheer for when the Rivalry Game came around.  The Eagles had won eight of the previous nine in the series, but the Panthers were healthier.  Both teams would have many freshmen and sophomores dressing for the finale. 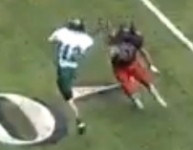 THE GAME:  Coconino wasted no time in putting points on the board as they took the opening kickoff and ran right down the field.  Crank took a Kuehl handoff on a play designed to go behind left guard, broke through a hole to the right, and raced for the pylon for a 24-yard touchdown.  Tacking on the extra point, the Panthers were up 7-zip with just a little over two minutes gone in the game, Crank accounting for all seven points.

Flag High came right back.  After Singleton was sacked around midfield, their initial drive seemed dead; on fourth down, senior punter Ben Anderson heaved a throw to Tyler Cullum who was split wide right.  Cullum fought for the first down and kept the drive alive.  His efforts reaped rewards as Christopher took it in from six yards out a few plays later.  Paul Evtimov kicked the extra point.  Barely through half of the first quarter, the game was tied at 7.

The Eagles held Coconino, got the ball back, and scored again.  This time it was Evtimov’s turn to get into the endzone; lining up on the right as a tight end, he ran a seam route, and Singleton found him; he beat the safety and was off to the races.  The extra point, however, was blocked by Erik Arvizu, leaving the score 13-7.

After the kickoff (the Eagles refused to kickoff to Lucero all night), the Panthers fumbled, and Evtimov was there to fall on it.  That led to a 35-yard field goal attempt that was botched.  After an exciting first quarter, the Eagles were leading, 13-7.

For most of the next two quarters, the Panthers ran the ball with authority, but just could not get another score on the board.  They ultimately ran for 279 yards on 50 attempts, slicing through the Flag High D for big chunks of yardage, but were stymied over and over again.  As the first half drew to a close, Coconino was in the red zone, all the way to the Flag High 4, but Kuehl just couldn’t score on a keeper as the horn sounded.  In the third quarter, Kuehl connected with Crank for 35 yards, getting it down to the 7; the Eagles’ stiffened again, and on fourth-and-goal from the 2, Kuehl rolled out and overthrew his receiver.  Flag High still held the lead going into the final quarter because, though the Panther backs were gashing the Eagles time and again, they couldn’t convert. 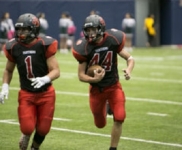 While the Eagles were playing a bend-but-don’t-break defense, the Panthers were swarming.  Smith chalked up two of Coconino’s five sacks on the night as their linebacking corps was getting to Singleton all night long and hitting everyone hard.  While Lucero wasn’t hurting the Eagles with kickoff returns, he was opportunistic on defense; he recovered a fumble and intercepted a pass in the third quarter.

Still, the Eagles were ahead as the fourth quarter began.

Deep in their own end, Flag High had to punt.  Andrade burst through the defensive left side and blocked it; Crank scooped it up on the 1 and scored.  That was the play the Panthers were waiting for all night.  Crank hit the now-very-important extra point, and Coconino was suddenly up, 14-13.

Flag High’s offense, content to nurse a small lead, now felt a sense of urgency, yet could not do much about it with the Panther D all over them.  LB Jake Merrill ended one Eagle threat by sacking Singleton on fourth down.  Beyond that, it was a matter of Coconino continuing to run the ball, straight ahead, Smith and Crank, collecting first downs and killing the clock.  Smith scored the final points with 26 seconds left, first on a 1-yard dive, then the same thing for two points, giving the Panthers a nine-point bulge and putting the game out of reach.

Chance Halstead won this year’s John Ply Memorial Award for being a stalwart on Flag High’s offensive line and on defense.  Cesar Andrade collected eleven tackles and a sack, and he blocked the punt that changed momentum in the game; for this, he won the 2014 Bill Epperson Award.

AT THE END OF THE DAY:  The frustration of having to play so many underclassmen this year hopes to be a blessing in 2015; inexperience today may become experience tomorrow.

Jeremiah Smith is now 3-0 in Rivalry Games, having won the two he coached for the Eagles and the one with the Panthers tonight. 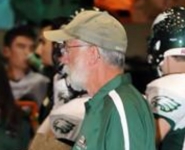 Two gentlemen who have been permanent fixtures on the sidelines said farewell in 2014.  Bob Oberhardt left the Eagles’ football program, and while he continues to work at Flag High and keep stats for the boys’ varsity basketball team, his canary pad and four decades of experience will be sorely missed.   Rivalry Game XLVI was the final game for the venerable David “Bulldog” Turner, and the Coconino faithful gave him a sendoff that brought tears to anyone who played football on the East Side over the last 35 years.