LEADING IN:  Holbrook had already clinched the AA North title by the time the regular season finale rolled around, leaving Coconino and Flag High tied for second place with identical 7-2 records.  The winner of tonight’s game would not only gain bragging rights and the city championship trophy, but also a postseason berth.  Coconino sported an awesome running attack, led by Casper Rice (861 yards and 10 touchdowns coming into the game) and Mel Hannah (840 yards and seven touchdowns), while Flag High’s victories came by way of stingy defense, allowing opponents just 189 yards and a meager 6.6 points per game, notching four shutouts.  Something had to give. 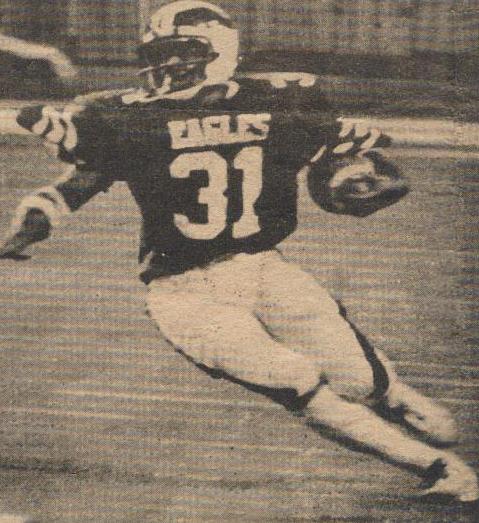 THE GAME:  Coconino was winning the battle of wills in the first half, drawing first blood in the second quarter with Rice’s 6-yard plunge.  Flag High was stifled, mustering only a single failed field goal attempt before halftime.  In the second half, however, Eagles’ senior fullback Greg Turner took over the game, gaining 130 total yards (111 on the ground and 19 in receptions).  His two short-run touchdowns in the third quarter put Flag High firmly in control.  The Panthers weren’t done yet, as they went on a massive drive that went 80 yards in 24 plays and gobbled up over nine minutes of gametime, capped off by QB Troy McReynolds’ one-yard push.  With a missed two-point conversion, the Eagles maintained a slim 14-12 lead until late in the fourth quarter, when Turner broke free for a 47-yard score to salt the game away.  Between his three touchdowns and three extra-point kicks, Turner accounted for all of Flag High’s 21 points.

AT THE END OF THE DAY:  Flag High locked up the #2 spot in the AA North standings, sending them on the road in the first round of the playoffs.  They lost a heartbreaker to Douglas, 23-22.  It was a successful season for Eagles head coach Larry Gray, but also his only season with the Green and Brown, as he moved on to

Flowing Wells the next year, even playing against the Eagles in the playoffs in years to come.  This game was the final game for the Panthers with Bill Epperson at the helm, the first varsity football coach the school ever had, after a thirteen-year run (Coconino only fielded a JV team in 1967) that brought home four division crowns and three state championships.  The Arizona Republic named him one of the 25 greatest Arizona high school football coaches of the 20th century, and he is a member of the Flagstaff Sports Foundation's Hall of Fame.

Original article by Dan Engler of the Daily Sun; published .