It’s Coconino by a Nose

LEADING IN:  Flag High and Coconino came into the game with identical 6-3 records and were vying for second place in the 4A Grand Canyon Region.  Mingus had already clinched the regional title, having beaten the Panthers the previous

week, 26-7.  Even a second-place finish would not be enough to guarantee a postseason bid for either team; going into the final week of the season, Flag High was ranked #17 in the power points, Coconino #26.  Tonight’s winner would still need some help to get to the playoffs.

The Panthers started the year on fire, winning six of their first seven games, only a 23-14 loss to Kingman kept them from being perfect to that point.  Two tough defeats, though, to Page (34-33) and Mingus cooled them down.  Being a team with a hardnosed defensive tradition, this year’s edition was more offensive-minded, scoring 40 or more points three times.  The heartbeat of that offense was Carlton Johns, the third Panther in school history to rush for over a thousand yards in a season and just over 200 yards from breaking the school record.

Flag High was peaking.  Having started the year 1-2, they won five of their last six and came to the Rivalry Game on the heels of a 24-0 pasting of Page.  They had their own rushing phenom in Adam Lozano, who had collected 1,155 yards in nine games.  Junior quarterback Travis Holland was 2-0 as a starter after taking over for the injured Gentry Clark.

Despite having two solid teams vying for the city championship and a potential playoff bid, the Daily Sun (once upon a time THE promoter of the Rivalry Game) lamented the growing lack of interest in the series, blaming the existence of Sinagua for splitting the local talent pool three ways instead of two and diminishing the importance of the rivalry.   A decade earlier, the city would have been abuzz, everyone north of would have been talking about the game.  The athletes, as always, were primed for playing the finale, but at this point, was the rest of the city on board? 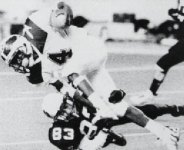 THE GAME:  On the first play from scrimmage, Johns ran for 27 yards, setting the tone for a game dominated by runningbacks.  The Panthers drove right down the field on the Eagles on their first possession, all runs, capped off by Dennis Clinger’s 11-yard romp that started as a dive off right guard, then, after bouncing and spinning down the line, he stayed on his feet and darted through the linebackers for the score.  The extra point failed, but less than four minutes in, Coconino was already on top, 6-0.

Flag High countered with their own run-only drive, with Holland giving the ball to Lozano and Darnell Potee, but after a couple of first downs, the drive stalled and the Eagles punted.  That’s the way it went for most of the rest of the first half, both offenses satisfied with keeping the ball on the ground.  Late in the second

quarter, after running Clinger and Johns over and over again, the Panthers finally broke a long one, as Johns took the pitch on a sweep around the right end and sprinted 71 yards for the second score of the night.  Johns finished the deed by running in the two-point conversion, and the Panthers led, 14-0, going into halftime.

After the Cats stopped the Eagles on their first possession of the second half and forced them to punt, they changed tactics a bit, trying their luck with the passing game, and they struck gold when QB Robbie Roberts found wideout Chris Nash on a fly route and, sixty yards later, he was dragged down at the Flag High 12.  A subsequent pass interference call gave Coconino a first-and-goal on the Eagles’ 5.  A false start call moved them back, but Roberts scrambled down to the two.  On fourth down, Clinger was stopped just inches from the goal line.  The Eagles made their stand, and it came at the right time, as the Panthers had both their ground game and passing game running smooth and were on the 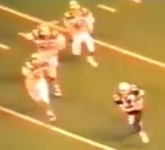 verge of a 21-point lead.  Instead of blowing the game wide open, momentum shifted abruptly.

From that point on, it was the Eagles imposing its will on the Panther defense, running the ball left and right, wearing the D-line down.  Lozano, Potee, Mack Jones and Deyman Doolittle all pitched in on the onslaught.  It paid dividends as the fourth quarter began, when punched it in from a yard out to finally get Flag High on the board.  Sophomore kicker Bryce Solberg nailed the extra point, and the Eagles were just a possession down, 14-7. 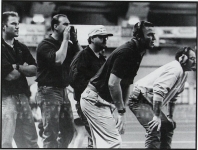 The Flag High defense continued to shut down the Panthers’ running attack.  Though Johns ran all over the Eagles in the first half to the tune of 148 yards, he was completely shut down in the second, losing four yards on four carries; for the game, he ran the ball 16 times for 144 yards and the one breakaway touchdown, but all his damage came early.

The Eagles’ backs, however, were hitting their stride, marching down the field again, and with left in the game, scored his second touchdown of the night on a one-yard sneak.  This time, however, Solberg missed the PAT.  Instead of being tied at a crucial juncture of the game, Coconino clung to a one-point lead.

Again, Flag High halted the Panthers and forced them to punt, and they got the ball back on the touchback with four minutes left.  Methodically, the offense pushed onward.  The Panthers helped them with a pass interference penalty that kept the drive going.  At last, they arrived on the Panther 21 with just three seconds left.  Solberg, with the ball lined up on the right hashmark, tried to hook the 38-yard attempt through, but instead it struck the top of the right upright and fell wide as time expired.  The Panthers emptied onto the field in jubilance as Solberg laid on the turf in agony.

AT THE END OF THE DAY:  Coconino won the city championship and finished the year in second place at 7-3, with Flag High third at 6-4.  The Panthers didn’t get enough help from elsewhere around the state and could not eke into the playoffs.

The rivalry itself, though, seemed lost.  The Daily Sun estimated 4,000 fans came to the Dome to watch the game; it wasn’t so long ago that the 15,000-seat Skydome was packed to the timber rafters.  However you wish to call it, no matter what direction you point your finger to assign blame, the athletes themselves still play their guts out, always have, always will, and it’s a crying shame their efforts were put on the community backburner.

Original story by Jason Stone of the Daily Sun: