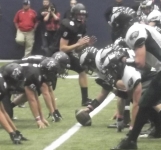 LEADING IN:  When last we left the Eagles and Panthers, the big question for the West Siders was, will their miracle win in the 2011 Rivalry Game be the turning point for the program, a program that went winless in 2010 and mustered just two wins in ’11?  The answer was a resounding Yes.  They came to the Duel in the Dome with a 6-2 record, after losing the opener to Poston Butte in the Kickoff Classic, the Eagles proceeded to win six of their next seven games.  Their offense began to click under the guidance of Head Coach Eddie Campos as junior quarterback Kyle Wilson became more comfortable with it. 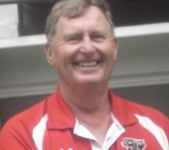 Coconino also improved.  The return of George Moate to the Panther sidelines meant a refreshing return to classic Panther football:  stingy defense, conservative quarterbacking, and hardnosed running between the tackles.  They cut down on the turnovers, they didn’t let mistakes snowball into avalanches, and they too were winning against the same teams they were losing to the year before.  At midseason they were 4-1 (and would have been undefeated, were it not for a last-second miracle fourth-down play by Paradise Valley’s All-Everything quarterback Ryan Finley), but key losses to traditional foes Mingus and Winslow had slowed their progress, and by the time the Rivalry Game came around, they were at 5-3 and looking for a big win to get them back on track.

Both teams were on the bubble for the playoffs after Week #8.  The AIA seedings had Flag High at #16, right on the cusp for the postseason, and Coconino at #20, unable to afford another loss.  The winner of this game would be in good position to make the playoffs, provided they got a little help elsewhere across Division III.  It’s a far cry from where these teams were even a year prior; after years of frustration, the teams had worked themselves into a position where the Rivalry Game became not only relevant, but crucial, a real do-or-die game for both teams.

THE GAME:  After the first couple of drives sputtered for both teams, Flag High was first to get their offense on track; Wilson was successful with roll-out passes early, WR Montana Membery gained yardage on the end-around, and with 3:46 left in the first quarter, Marshall Brownfield scored from a yard out to break the ice.  Trace ’s extra point put the Eagles up 7-0.

Coconino’s offense wasn’t as successful in the first half.  Their first three drives ended with two punts and a turnover on downs.  Sophomore QB Damian Alarcon dropped back under duress all night, being sacked eight times and was otherwise harassed most of the game.  Their defense, however, kept the Panthers in it; Andrew Broadston intercepted a pass in the second quarter to stymie an Eagle threat, Regis Rumfola got an interception in the third, and though the Eagles were better than the Panthers about controlling the ball and the clock, they were unable to make a play longer than 18 yards.

booted a 34-yard field goal with left in the second quarter, and the Eagles went to the locker room at halftime with a 10-zip lead.

The Panthers finally got on the board with seven seconds left in the third quarter.  Moate had been running Bubba Daulton and Stephen Sorden up the gut all game long until they finally broke one, Daulton’s 24-yard blast for a touchdown.  Spencer McMahon missed the point-after, but going into the fourth quarter, despite a lack of consistency on offense, Coconino only trailed Flag High by a 10-6 score.

Flag High came back.  Dillon Gifford converted a key fourth down, and a Panther defensive personal foul set the Eagles up on the Coconino 5.  Brownfield cashed in on another short run, this time from three yards out; missed the kick, and the Eagles were up 16-6.  It proved to be enough.  The Coconino offense, reserved in nature, was unable to cut into the deficit, as the Eagles’ pass rush continued to hurry Alarcon and slow down the Panthers’ running attack. 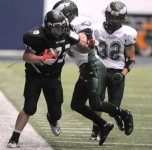 AT THE END OF THE DAY:  Though Flag High won a big game against a fellow D-III team with a winning record, the AIA computers demoted the Eagles to #18 the following Tuesday, which meant they needed a win in their finale against Page and a lot of help to get into the playoffs.  They held up their end, crushing the Sand Devils 63-6; unfortunately, of the several teams ahead of them in the standings needing to lose to help out the Eagles, only lost, which put Flag High at #17 and less than a half a power ranking point behind the #16 seed and last team to qualify, Shadow Ridge.

Coconino also won their last game of the year against , winning 28-0 and ensuring the Panthers’ first winning season since 2004, the last year Moate was at the helm.  The previous year, a few mistakes early in the game would snowball into blowout losses; this year, they limited their turnovers, and when they did

commit them, they didn’t allow the game to get out of hand.

Though the futures for both schools look bright and the rivalry is as good as ever, the city of needs to catch up.  Flagcoco estimates 4,000 fans attended the game, which is a far cry from the packed houses of yesteryear.  The coaches are old-school and have their programs on the upswing, the student bodies were there in force, the bands were playing, and the athletes played inspired ball.  The only thing left is for the Dome to fill up again.  We can name several reasons for this, but to go beyond the fingerpointing, the people of Flagstaff need to rediscover the rivalry as part of their shared history and heritage, the media in Northern Arizona need to treat it with the reverence it deserves instead of as a sidenote to cover begrudgingly, and the programs need to continue to improve steadily.  In other words, the rivalry itself is as intense and vital as ever; it just needs to be dusted off and returned to its place in culture.