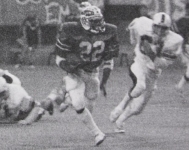 LEADING IN:  The only question going into this year’s game was, will Coconino be able to slow down David Winsley?  By the time of the annual crosstown match-up, Winsley had broken ’s all-time rushing mark, and no one seemed able to slow him even a little.  Not only were the substance of his records astonishing, but also his style.  Playing Prescott and down by two with less than a minute left, Winsley scooted down the sidelines, shaking off tacklers, with the Flag High coaches screaming at him to get out of bounds to kill the clock; instead, he darted for 51 yards and the winning score in what is known in Eagles lore as “The Run”.  He later broke George Greathouse's state record against with a 327-yard performance that remains the Flag High record to this day. 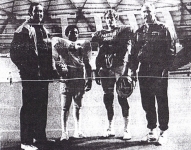 The Eagles were flying high with their 8-1 record and looking for their fifth straight state title; the move from AA to AAA didn’t slow their roll at all, defeating schools like and Cortez with the same ease as they showed in beating more traditional rivals like Snowflake and Kingman.  Bert Gough was slated to start behind center for the Green and Brown tonight, and as usual, their defense was stingy, giving up just 73 points all season to this point, a stifling 8.1 points a game.  Only a tough 21-17 loss to Sunnyslope marred Craig Holland’s first year as head coach, and though he had been an assistant for Rick Smith through the championship years, tonight’s Rivalry Game was his first as top dog.

Coconino wasn’t too far behind.  They came to the finale at 7-2, having secured a playoff spot the previous week in a 16-7 win over Cortez.  Their defense was as reliable as ever, keeping them in every game, allowing 88 points (9.8 a game).  Offensively, their hopes were pinned to senior quarterback Dave Davison; in the ’84 Rivalry Game, he completed only seven passes for 45 yards.  Even if the defense could rise to the Herculean challenge and stop Winsley, it would be up to Davison to direct the offense and put points on the board.

Both teams were assured postseason berths.  Seeding depended not only on what happened in the Dome tonight, but elsewhere around the state.  Just as it was during the AA North days, the Eagles and the Panthers were both in the thick of things.

THE GAME:  12,000 football fans jammed into the Skydome to witness the seventeenth edition of the rivalry.  The first half went along as planned for the Panthers; Winsley was kept in check and out of the end zone, and the offense was racking up yardage.  Davison found tight end Scott Cockerel for a two-yard score in the second quarter to put Coconino up 7-0 at halftime.

Coach Holland, noticing the Eagle offense was stagnating, made a change in quarterback after the first possession of the second half, pulling the senior Gough and inserting sophomore Mike Caputo.  In his first drive, he led the offense down the field, and on a fourth-and-two on the Coconino 4 with just under two minutes left in the third quarter, Winsley blasted through to finally get the Eagles on the board.

The Panthers had their chances to put more points on the board, but couldn’t convert.  They were in the red zone four times over the course of the game and could only muster the one touchdown.  Despite Caputo jumpstarting the Eagle offense for the one drive, Flag High was even more stifled, pushing past the Coconino 45 just twice all night.

The game remained a 7-7 tie deep into the final stanza, the defenses reigning supreme.  Jimmy Baca and Jon Fogelson were holding up their end, shadowing Winsley all game, holding the runningback to 96 yards on 27 carries, the first time all year the great back had been

held under 100, notching 14 tackles apiece in the process.  With every stalled possession, the defenses seemed to get stronger, and the tension would grow.

That tension was at fever pitch with 26 seconds left in regulation, the Eagles were on the Coconino 16, and Dawson Gofourth came in to kick what would be a 33-yard field goal.  Panther head coach Mike Olson called back-to-back timeouts to ice Gofourth, but when it finally came time to kick, the snap was good, Manual Delgado’s hold was true, and the kick split the uprights, ripping the heart out of every Panther fan everywhere.

AT THE END OF THE DAY:  Coconino ended the regular season at 7-3, nailing down fourth place in the AAA Skyline Conference, and earning a trip to Sunnyslope.  The Vikings took advantage of a huge offensive line (their tackles weighed 254 and 242 pounds, versus a Coconino front four that averaged 195 pounds) and simply ran the ball down the Panthers’ throat 46 times for 228 yards.  The offense netted 171 yards for the game, most of that in the fourth quarter as the Panthers tried desperately to cut into ‘Slope’s 10-0 lead, but couldn’t, hence the final score.

By virtue of their win tonight, Flag High finished in a three-way tie for first place with Prescott and Sunnyslope.  They lost the coin toss, which meant, despite their stellar 9-1 record, they would be on the road to take on the Badgers in .  Winsley was his usual fantastic self, stockpiling 156 yards and two touchdowns (one running and one as a passer), including a spectacular 79-yard score that could have well been dubbed “The Run II”, as the Eagles built a 17-0 lead at halftime.  Big plays, however, did the Birds in as fullback Scott Davis diced up the defense in the third quarter, first with an 82-yard scoring romp, then a 60-yarder that set up another score.  He eclipsed Winsley with 179 yards of his own, and the Badgers won, 22-17.

The loss halted Flag High’s incredible championship streak at four.  Winsley ended his high school career with 4,868 yards, and despite scholarship many top Division I universities, he stayed in state and became a Sun Devil.  David still lives in with his family.

Original article by Mike Patrick of the Daily Sun;

Statistics compiled by the Daily Sun and Bob Oberhart (separately)