LEADING IN:  Though both teams were struggling with sub-.500 records coming into the Duel in the Dome, Coconino (4-5 overall, 2-2 in Grand Canyon Region play) had a sliver of a chance to make the playoffs for the first time in five years.  Flag High (3-6, 2-2 GCR) was out of the playoff picture after a season of injuries, disappointments, and a bit of coaching drama, as head coach Jeremiah Smith took a personal leave of absence in the middle of the season (Greg Lees took over in the interim and, among other things, led the Eagles to a 19-16 win over Thunderbird).  The two teams were having similar seasons; they both played with inconsistency and it showed in their records, and they had identical divisional records, so identical that they had the same results against common opponents (they both beat Sinagua and Page and lost to Mohave and undefeated Mingus).  Beating Youngker by a single point, 21-20, was the reason why Coconino came into the game with a slightly better record and a slim shot at the postseason.

The similarities, however, were only in the standings.  Flag High was pass-oriented, dependent on the arm of senior quarterback Luke Rotter.  Versus Sinagua earlier in the season, Rotter set the school record with 302 yards passing.  He threw for 12 touchdowns coming into the game, but also gave the ball away almost as much with seven interceptions and three fumbles.  He was certainly capable of wrecking the Panthers’ postseason dreams, provided he played an error-free game.

The Panthers ran the ball.  Period.  Coming into the game, they averaged 207 yards a game on the ground.  Instead of one primary runningback, Coconino had a triumvirate:  Zeno Joyce, Brady Nittman, and Isaac Hector.  Their finest game of the season was against Page, just two weeks prior, where the Panther ground machine churned out 498 yards, Nittman carving out 193 of those yards, Hector with 189, and Joyce with 82.

The game would be about this contrast in style.  Would Rotter and the Eagles be able to pass on the Panthers’ defense, or would Coconino’s running assault control the ball and the clock?

THE GAME:  The answer came the first time Flag High got the ball.  Coconino took the opening kickoff, got to midfield, and had to punt.  Matt Whelan kicked a near-perfect punt 50 yards, down to the Flag High 1.  Four plays later, the Eagles were in the end zone.  Lined up slot left, Jake Walton streaked down the hashmarks, and Rotter hit him in stride about 25 yards downfield, just past the beaten Panther defensive backs; Walton did the rest on the 81-yard catch-and-run, and with Will Jenny’s extra point, the Eagles quickly took a 7-0 lead.

“That was really big,” Walton said about the play, “I think it set the tone of the game because was out to get us since the last four years we’ve taken the city championship.  We had to set the tone quick.”

Coconino was able to run the ball to a degree, getting bogged down once they crossed midfield.  After giving the ball up again, Rotter engineered another scoring drive, this one culminating in a 9-yard touchdown pass to Jake Scully on a fade pattern.  With left in the second quarter, Flag High was up, 14-zip.

The Panthers answered with their own drive, capped off with Nittman’s one-yard push.  The two-point conversion attempt failed, but Coconino was on the board, and though Rotter was carving their D to shreds, they trailed 14-6 with left in the half.

That was more than enough time, though, for Rotter to kill what momentum the Panthers had generated for themselves.  On the ensuing drive, he needed just three plays to score.  After hitting Landon Leisek on a post for 45 yards, he found Scully again on a fade in the end zone, this time from 19 yards out.  Instead of going into halftime with a manageable deficit to overcome, the shellshocked Panthers were down, 21-6, at intermission.

“That drive was huge,” Rotter later explained, “They had the momentum and we came right back and got the momentum at halftime and kept it the rest of the game.”

Rotter threw an incompletion on his first pass of the game and didn’t throw another one until the third quarter.  Using quick three-step dropbacks, he was able to get his passes off in the face of the Panthers’ blitz.  His receivers were gaining big chunks of yardage all night.  Walton had six catches for a school-record 198 yards, three of them for over 30 yards.  Jesse Tate raked in a 27-yard reception of his own.  All totaled, Rotter completed nine passes of no fewer than 17 yards.

When he wasn’t beating the Panthers with his arm, Rotter was beating them with his feet.  He was able to scramble his way out of trouble all night, not just to elude the pass rush, but to gain yardage.  He scored two touchdowns himself in the second half, one on a 10-yard scamper early in the third quarter, and the other on a 1-yard dive. 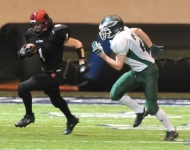 The Rotter Show concluded with him eclipsing his own school record, collecting 336 yards passing.  He accounted for all five Eagle touchdowns.  Between last year's Rivalry Game and this year, his stat line was:  36 pass attempts, 22 completions, 507 yards, 6 touchdowns, and just one interception; he also rushed for 27 yards and three more touchdowns.

Panther head coach Tadd Ragan was amazed.  “I don’t quite have the answer tonight… We’ve got to learn how to stop the pass here at Coconino and we’ve got to learn how to throw the ball if we want to do anything.”  His offense amassed 163 yards on the ground, Isaac Hector picking up 93 of it himself, but on 54 carries (quarterback Casey Sifling threw seven passes all night), they only averaged three yards per rush.

AT THE END OF THE DAY:  Both teams ended up 4-6 on the season.  Flag High finished third in the Grand Canyon Region with a 3-2 record in regional play, Coconino ended up fourth at 2-3.

It proved to be the final game for Jeremiah Smith at Flag High.  Though the Eagles went 7-13 during his tenure, he was 2-for-2 in the Rivalry Game.

To this point, Tadd Ragan had been coaching the Panthers for five years and still hadn’t beaten their crosstown rivals.

2009 also marked the final year of Sinagua varsity football.  Cuts in the ’s budget forced the closing of several schools and the demotion of Sinagua to middle school after the 2009-2010 school year.  The three-way competition for the City Championship was over, was back to just the two high schools.

Original story by Rory Faust for the Daily Sun;