The history of the rivalry would not be complete without a page for the Sinagua Mustangs.

inagua opened its doors in the fall of 1989, becoming ’s third public high school.  They fielded their first varsity football team in ’91 (much as Coconino did their first year open in 1967, Sinagua played JV football in ’89 and ’90), led by Ed Campos, formerly an assistant at Coconino High.

The Mustangs struggled through their inaugural campaign with a 2-7-1 record, including a tough 34-0 loss to Flag High for their first taste of rivalry play; the game marked the start of bad blood between Flag High and Sinagua, a theme that would continue throughout the series, as Eagles standout runningback Ceaser Polk scorched 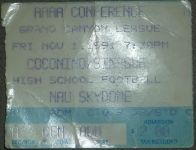 prowess and hyping the game, which Polk and the Eagles used as bulletin board material; Campos took it in stride, but the seeds of animosity were sown).  Sinagua recorded their first varsity win a few weeks later, against the other school, Coconino, by a score of 14-6; Danny Caputo intercepted a Sammy Cockerel pass in the end zone with 23 seconds left in the game to dramatically seal the win.

With a year of varsity experience under their belts, the Mustangs fared much better in ’92, going 6-4 in the regular season (despite Polk and the Eagles running up a 62-3 score on them) and earning their first playoff berth.  Scheduled to play Flag High in the first round, the Eagles were forced to forfeit the game and vacate their wins because of an administrative error that let them play an ineligible player all season (See 1992 Game).  The game would have marked the only time two teams met in the postseason.  In effect, the first round ended up being a bye week for Sinagua.  They were manhandled by the following Friday, 41-0.

Sinagua notched their first city championship in ‘97, the first year they beat both Flag High and Coconino.  They went 9-1 that year, lost in the first round of the playoffs, but it marked the in Mustangs history.  From 1997 to 2002, they won the city title four times, each time qualifying for the playoffs, three of those times as the 4A Grand Canyon Region champion.  also won Coach of the Year honors three times.  The only four seasons the Mustangs won eight or more games was during this time frame.

In the playoff run of 1998, behind the running o

f Jeremiah Miller and the passing of Justin Bryan, the #8 Mustangs beat in the first round, and then not only won against top-seeded Cactus, but smoked them, 44-14.  They made it to the state semifinals, where they lost to #4 Agua Fria, a team that beat them in the season opener, 31-0, by a score of 20-6; As of this writing, they are the last

Flagstaff team to go so far in the playoffs, as neither Coconino nor Flag High have gotten out of the second round since the early ‘80’s.

It is noteworthy that in their entire history, the Mustangs beat the Eagles only four times, but all four times led to city championships and playoff appearances.

In 2003, Coach Campos left the team in midseason due to a family emergency, leaving the Mustangs in the hands of David Moran.  The team was never the same.  While they did make the playoffs in 2005 (astonishingly, with a 3-7 record, and got crushed by Mingus, 55-7), they slid into mediocrity thereafter.  Paul Wolf took over as coach in 2007 and could only muster one win in each of his two seasons, both against Coconino.

The bad blood between the Mustangs and the Eagles lasted throughout the series.  A very unfortunate incident happened in 2007. Flag High was up 14-7, had the ball on the Sinagua 1 with four seconds left in the game; instead of letting the 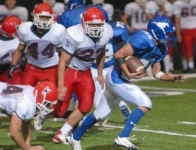 clock run out, the Eagles opted to call a timeout, run a play, and tack on a touchdown.  Sinagua’s Paul Wolf took it as an unmistakable insult and refused to let his players shake hands with the Eagles after

the game; Whether or not the play was his decision, Flag High head coach Erik Affholter took the blame and also the abuse that came with it, including having his car vandalized, receiving anonymous phone calls, and his child threatened.  Affholter, who was already having a tough first season and considering his resignation anyway, quit within the week.

After Wolf’s back-to-back 1-9 seasons, Dave Dirkson took over as head coach in 2009 with the hope of rebuilding Mustang football.  He went winless in a season that proved to be Sinagua’s last; in June 2010, the , spurned by dwindling attendance and tightening budgets, closed several schools.  Sinagua was demoted to middle school status.  The student body and staff split up between Flag High, Coconino, and the various charter schools.

The first team and the last team the Mustangs ever beat was the Coconino Panthers.  Sinagua held a 4-15 record against Flag High and went 8-11 versus Coconino. 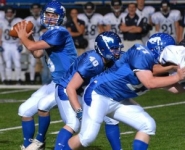 It is the opinion of many that the mere existence of a third high school automatically killed the unique nature of the Flag High-Coconino rivalry; Sinagua is blamed for thinning Flagstaff’s talent pool, and instead of just one winner-take-all game deciding the city championship, it took three games in three weeks, destroying the

intensity.  It is an argument with precedent; when Coconino opened in 1967 and took half of Flagstaff’s pool of talent—a pool Flag High had previous enjoyed exclusively—yes, for a few years, the Eagles lagged, but through AIA realignment and solid coaching, they came back, better than ever.  Looking deeper, the slashing of school budgets meant less money for athletics across the board; while the Eagles, Panthers, and Mustangs maintained their varsity and JV football teams, their freshman teams were at times cut altogether, as well as middle school teams.  In this writer’s day, a football player could play from fourth or fifth grade straight through high school 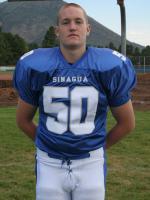 without interruption because there was organized youth football and money for middle school and freshman programs, which meant better conditioned players with more experience by the time they got to varsity.  Personally, I believe the improvement of Northern Arizona University’s football program and the Arizona Cardinals staging their summer camp in Flagstaff moved high school football, at one time the biggest game in town, to the backburner in terms of both money and media interest.  The point is, it is too simple to just blame Sinagua, when in fact, many factors went into the decline of prep football over the last two decades.  The varsity program is now part of high school football history and deserves respect.

The 2015 varsity football season would have been Sinagua's 25th.  In honor of their would-be Silver Anniversary, Flagcoco (with a little help from its friends) presents this All-Sinagua team in the hope of remembering the Mustangs, their players and coaches and fans. 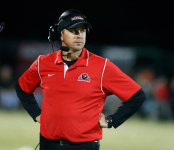 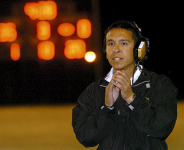 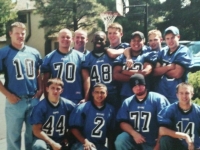 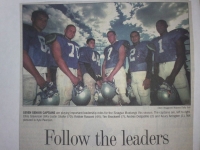