LEADING IN:  The coaches’ revolving door continued for Flag High in 2015.  After a 2-8 season, Robbie Rusconi was replaced by Dave Dirksen, an assistant superintendent for the and, football-wise, the last head coach the Sinagua Mustangs ever had.  If you include Greg Lees’ three games as interim head coach in 2009, Dirksen became the Eagles’ eighth head coach in nine years.  What Flag High was looking for was consistency and a back-to-basics attitude.

Coconino was looking to build on their 3-7 season from ’04 with familiar faces.  This was Season #2 for Jeremiah Smith at the helm, leading his offense was senior Cristo Tabares, and the rallying cry was “Clear Mind, Pure Heart, Can’t Lose!”  Unlike his sophomore and junior years, Tabares was not embroiled in a quarterback controversy this time around, which meant taking the lion’s share of snaps in practice and not having to look over his shoulder whenever he made a mistake.  The Panthers had several pieces to their puzzle to success returning, including Weston Smith (who proved to be as tough as a runningback as he had been on defense) and Jacob Hughes (a wideout with bigplay capability).  The inclusion of Arthur Chee and Francisco Garcia and the return of David Quick meant the potential to be versatile on offense, be it Smith and Garcia banging it between the tackles or Chee on the end around, Tabares passing to multiple receivers, or the quarterback simply tucking it in and running.

And at times, their offense clicked on all cylinders.  Looking at the score of their opening loss to Cactus does not do the ’15 Panthers justice, as they had a decidedly different feel about them; they ran harder than in previous years, they hit harder, and they were capable of making plays.  They won three of their next five games by displaying a more wide-open defense, much more predicated on the pass than in recent seasons.  The came on Homecoming Night; Coconino hosted the Goldwater Bulldogsand set records in their 55-34 win, with Tabares passing for 384 yards and six touchdowns.

Whereas the Panthers had a wide-open offense, Dirksen’s Eagles had a more conservative approach.  Their plan was to play hard-hitting defense and for their offense to do just enough and not make many mistakes.  After spotting North High 12 points in the season opener, they shut out the Mustangs for a 27-12 win, then proceeded to blank the Kingman Bulldogs the next week.  At Goldwater, holding onto a 14-7 lead deep into the fourth quarter, the defense rose up and scored three touchdowns of its own to win going away.  Their signature win, however, came against the always tough Prescott Badgers, a 36-6 beating no one in the media saw coming.  While Dirksen can take much of the credit for returning Flag High to a competitive style of smashmouth football, recognition must go to two individuals largely responsible for the resurgence; junior QB Christian Singleton for managing the offense, and defensive coordinator Paul Wolf (also a former head coach at Sinagua) for putting together solid gameplans.

While the Eagles were certainly creating an identity for themselves and showing marked improvement, they still came to the Rivalry Game with a subpar 4-5 record.  All five losses came against playoff teams (including a thrilling 32-28 loss to Payson in the Skydome).  They played with the slogan “One Heartbeat, The Power Of One”, signifying their devotion to team play, and while there certainly were standouts (Avery Wilson came off the bench and came within two yards of completing the miracle against Payson, Nick Christopher and Austin Rhoda ran hard, Bridger Hershey make big catches all year, and CJ Tompkins made big plays all over the field), they bought into Dirksen’s plan, and it paid dividends.

The Panthers were 3-3 heading into sectional play, but lost their games to Mingus, , and .  They did, however, have their moments and chances.  They trailed the champion-to-be, Mingus, by just a 7-0 score moments before halftime, playing their tails off on defense, but they gave up a long TD just seconds before the break, and the game unraveled from there.  Against the reigning champs, Bradshaw Mountain, Coconino got off to a quick 13-0 lead by coming out on their opening drive meaning business, scoring fast and taking advantage of a Bears’ fumble; at halftime it was still a game at 28-20, but Bradshaw (becoming increasingly known for high penalty totals, personal fouls, and cheap shots) pulled away in the second half. 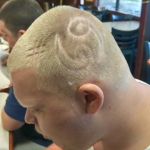 Coconino had the week off prior to the Rivalry Game and was relatively healthy and prepared.  At 3-6, a win over the Eagles would have meant an improved record over last year.  For Flag High, they had already doubled their win output from the prior season and were looking to end at .500.

THE GAME:  Coconino got on the board on their first possession; though the Eagles held the Panthers to three-and-out, a roughing-the-punter penalty gave the Panthers the ball back, and they took advantage.  First Tabares hit Quick to move the ball into Flag High territory, then he launched a bomb to Chee down the left sidelines to set up shop on the 1.  Weston Smith punched it in from there, and in less than three minutes, the Panthers were up, 7-zip.

The Eagles looked like they’d come right back to tie things up after a 25 yard hookup from Singleton to Hershey, but at the end of a nice run by Christopher, he coughed up the ball, and the Panthers recovered.  Hughes’ 18 yard reception got Coconino to its own 46, but that was it; unable to capitalize on the Eagles’ miscue, they punted.

On third-and 5 from their own 25, Singleton hit Tompkins on the slant pattern, and the receiver took it from there, 75 yards total.  The extra point was blocked, leaving the Eagles behind, 7-6, at the end of the first quarter.

After a few punts exchanged, the Panthers were driving again, starting from their own 36.  A first down and a personal foul quickly put them in Eagles’ territory.  Facing 4th-and-7 from the Flag High 28, they went for it, but the pass went incomplete.

From there, the Eagles went on a 12 play, 72-yard drive that gobbled up five minutes of the second quarter.  It was quintessential Dirksen; lots of safe runs and dump-off passes, nothing too fancy.  They converted four third downs on the drive, the last one being a quick pop to Tompkins, who drug Panthers with him until, 38 yards later, he was in the end zone.  The two point conversion attempt failed, but Flag High was now up, 12-7.

With before halftime, Coconino had time to muster one more scoring threat, and they did.  Tabares found Hughes for 27 yards to get the drive going, and then, after runs of 10 and 18 yards, the Panthers had 2nd-and-5 from the Eagles’ 9 with a little less than a minute left.  That’s when the Flag High D stepped up, as Gabe Matus sacked Tabares for a nine yard loss.  A pitch to Chee on third-and-long gained them only a yard, which meant, with time winding down, Christian Casados had to attempt a 36-yard field goal, which fell short.

Austin Rhoda ran the ball only once in the first half.  When the Eagles got the kickoff after the break, they made it a point to run him right at the Coconino D early and often.  Seven of the first eight plays of the half were to him, all of them of the up-the-gut variety, accounting for 64 of Flag High’s 67 yards on the drive, including a three-yard plunge into the end zone.  For good measure, he also ran a pitch on the 2-point conversion.  Just like that, the score was 20-7.

Chee had a nice return on the ensuing kickoff, but a Tompkins sack of Tabares ended the possibility of a solid Panther drive.  On fourth down, the punt snap was bobbled and recovered on the Coconino 19, that’s where the Eagles set up shop.  They need to convert two fourth downs to do it, but they turned the short drive into six points when Singleton dove in from a yard out.  The conversion failed, the score was now 26-7.

At this point, the Panthers were starting to feel the heat.  As another solid Chee return set them up in decent position, they took more to the air.  A Hughes catch for ten got them to their own 44, but Ben Anderson sacked Tabares, bringing them back to the 35.  On 4th-and-19 and deep in their own end, they tried to fake a punt; Jared Baca took off on a run, but only picked up a couple of yards.

The teams exchanged punts, and with left in the game, Flag High had the ball on their own 41.  At , they were in the end zone again, needing eleven plays and chewing up nearly half the quarter to do so.  Rhoda plowed in again from two yards out, but it was Hershey’s 15-yard catch on third down that kept the drive alive.

To their credit, Coconino wasn’t ready to give up just yet.  The Panthers orchestrated one last drive, and Tabares was certainly their maestro.  Either passing or running the ball himself, Cristo led the team on a 19-play odyssey.  He connected with Hughes twice on fourth down to keep their final hurrah alive, and when he hit the sure-handed CJ Anderson to convert a third-down, the Panthers were on the Flag High 12 with less than a minute left.  Tabares tried to will the Panthers into the end zone, but a sack on fourth down ended the possibility once and for all.  If he hadn’t ever done so before, he earned his golden cleats on that drive.  At the end of the night, he also earned the Bill Epperson Award as the Outstanding Panther for the game.  For his two touchdowns and his play on defense, CJ Tompkins won the John Ply Memorial Award for the Eagles.

AT THE END OF THE DAY:  Coconino ended with the same record they had last year, at 3-7.  Flag High showed marked improvement, finishing 5-5.  After the win, there was a little bit of playoff talk, but as has been the case since 2007, neither team made it.  The Eagles now lead the series, 25-22, but they have won nine of the last eleven.  We hope the coaches stick around to create stability and see the rebuilding processes through (while Flag High has gone through many changes in leadership over the last decade, it must be said that Coconino has had three head coaches in the last five seasons themselves).  If they can steadily improve and show stability at the top, turnout for tryouts will certainly grow, which may be the one thing holding both teams back; it’s hard to compete against Phoenix teams that dress seventy players when the Panthers and Eagles struggle to dress forty and their injuries quickly use up whatever depth they have. 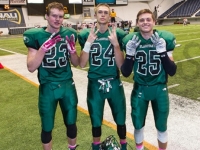 Original story by Mike Hartman of the Daily

Statistics from Cody Bashore of the Daily Sun