LEADING IN:  Expectations weren’t particularly high for Coconino heading into 1973.  They hadn’t had a winning season since going 8-2 in 1969.  Although they had thirteen lettermen returning from ’72, they were still lacking experience as a team, being heavy with underclassmen.  “We’re a little green,” Coach Bill Epperson told the Daily Sun as the season started, “we’ll be starting six underclassmen on both offense and defense.  With our inexperience, our hope is that we can just play relatively mistake-free football.”  They were also noticeably small on the offensive line, but Epperson expressed optimism for the unit; “They’ve been coming along real good.  We don’t know yet how good they are, but they have improved a lot as a unit, they really have.”

As always, the Panthers could rely on stellar defense to keep them in games.  They also boasted an offensive backfield that included J.B. Callado at tailback, David Blackburn as fullback, Brent Call at flanker, and junior Ray Smith taking snaps. 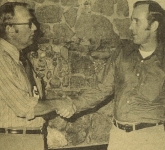 Flag High, on the other hand, had size and experience.  Hadley Hicks had his Eagles in better shape than in previous years; “We’re thinner this year and we’re quicker.  The players have really worked to get themselves into shape.” Both the offensive and defensive lines were big and veteran.  They also had speed in the backfield, especially from Robert Smith and Steve Larson as runningbacks.  Bryan Seymore was slated to start at quarterback.

The plan for this season, however, was to be physical, as defensive coach Jim Clements explained:  “We’ll just go out and hit as hard as we can and let the score take care of itself.”

THE GAME:  The first half saw a lot of ball movement but no scoring.  The Eagles had two touchdowns called back because of penalties, while the Panthers moved the ball at will but got bogged down in the red zone.  Coconino looked like they were getting on the board first in the opening quarter, as they drove to the Flag High 5; the Eagle defense stiffened, held the Panthers out for three plays, then blocked Benny Flores’ field goal attempt.  In the second quarter, Larson fielded a punt and raced 66 yards for an apparent score, only to have it negated for clipping, giving the Eagles the ball on the Coconino 35; on the next play, Seymore ran up the gut and sprinted into the end zone, this play also called back for clipping.

The game remained scoreless until 4:39 left in the third.  Flag High had the ball on the Coconino 19.  Fourth and eight.  Seymore handed off to Larson, and the speedster shot through the Panther defense for a TD.  The two-point conversion failed, but the Eagles were on the board with a 6-0 lead.

On the ensuing series, the Panthers fumbled, and before the ball hit the ground, Flag High’s Brian Dierker snatched it and raced 25 yards for the score.  This time, the conversion was successful, with Seymore keeping it on the ground for two.  With eighteen seconds left in the quarter, the Eagles were up, 14-0.

It wasn’t until the fourth quarter that the Cats finally got on the board.  Ray Smith had been guiding the Panther offense up and down the field all day, but had nothing to show for it.  At the Flag High 9 he called his own number and ran in for a score.  The conversion failed, but at 14-6, the Panthers were within a single possession of tying the game.

The scored remained this way—thus, the game remained in doubt—until the final two minutes.  That’s when Larson snagged a Smith pass and raced 35 yards for a pick-six to seal the deal.  Seymore’s pass to Dave Maine for the two-pointer closed the scoring.  Though the Panthers won the statistical battle (they gained 214 yards of total offense versus the Eagles’ 81), their mistakes, including three turnovers, proved costly.

AT THE END OF THE DAY:  Flag High won the ’73 finale over their old rival, the Prescott Badgers, 14-0.  Between winning the opener and the closer, however, the Eagles mustered only one more victory, a 35-14 pasting of Sunnyslope.  Their fate against the rest of the AAA Skyline Division was, in comparison to the previous few years, par for the course; they were shutout four times against Phoenix powerhouses like St. Mary’s and Marcos de Niza, and they finished 3-7.

1973, however, was the last year Flag High would have to endure their AAA schedule.  Realignment meant the Eagles would be moved to AA.

Speaking of AA, the Panthers didn’t exactly start the season as world-beaters either.  At the halfway point they were sitting at 2-2-1.  Game 5 was a heartbreaker.  Leading the always-tough Winslow Bulldogs with two minutes left, they gave up a 70-yard breakaway touchdown run by Siegfried Ezell; mustering a final drive and making it to the Winslow 23 via Smith’s long pass to tight end Rick DeCosmo, their last gasp fizzled on a failed fourth down.  Now looking up at 4-0-1 Winslow and the rest of the AA North, perhaps the prognosticators were right in not having high expectations for the Panthers this year.

But the Cats caught fire in the second half of the season, winning five straight, capping the regular season with a 35-14 rout of the Agua Fria Owls.  Both Coconino and Winslow now sat at 7-2-1, and though the Bulldogs beat the Panthers, Coconino was 5-1 in AA North play, while Winslow was 4-2.  Smith was starting to assert himself as the leader of the team, not just as a playmaking quarterback, but on defense and special teams as well, returning kicks and making interceptions and tackles at key moments. 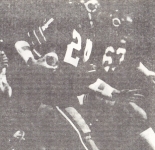 The AA North champions met the South’s Flowing Wells Caballeros for the state championship, just as they met for the title in 1968.  That game was a defensive struggle that ended with a miracle finish for the Panthers.  This time was just as tough, and the result was the same, with Coconino taking home the championship trophy, this time with a 14-3 victory.  The Cabs took an early 3-0 lead on Pete Dobyns’s 28-yard field goal and seemed to be able to move the ball at will, but fumbles stymied many a drive.  Smith found DeCosmo in the endzone amid a crowd of Caballero defenders for a 13-yard TD pass to put the Panthers ahead in the second quarter.  At the start of the fourth quarter, Smith handed off to Mark Lescoe, who threw to Brent Call for a 21-yard score.  Their offense was just potent enough, but it was their defense that won the day, taking the ball away from Flowing Wells eight times (five fumble recoveries, three interceptions).

Ray Smith’s place in Coconino sports lore was now secured.  As a sophomore, he led the Panthers to a 20-5 record and a 74-68 win over Canyon Del Oro in the state championship game, gaining All-State recognition in the process.  As a junior, he had just won the state football championship, becoming Coconino’s first 1000-yard back (he gained 1,004 yards in eleven games).  What would the Coconino Kid do for an encore in his senior season? 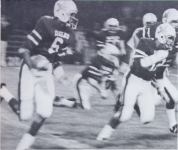 Original text for Flagcoco written by Russell Woods; May 26, 2014