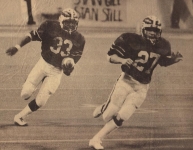 LEADING IN:  Coconino (7-1-1) and Flag High (8-0-1) came the Rivalry game poised for the playoffs.  The Panthers were 3-0 in conference play and were in solid shape.  The Eagles, on the other hand, were 2-0-1, that tie being problematic; the tie came against Winslow, and by way of Arizona playoff, Winslow won, gaining more yards than the Eagles in overtime.  That meant both the Bulldogs and the Eagles were actually 2-1 in the conference, with Winslow holding the tie breaker.  Even with being undefeated at this point of the season, a loss to the Panthers would mean no playoffs.

The Eagles, however, were not in dire straits.  Second-year coach Rick Smith had already amassed an impressive winning record, having never lost a regular season game in regulation.  Senior runningback Stan Gill was having an incredible season, rushing for 1,360 yards and 23 touchdowns in nine games and working his way up the state's all-time yardage totals.  Quarterback Puffy Hickman was passing at an efficient 55% rate.  Fullback Tony Cullen not only opened holes for Gill, but was a productive runner in his own right, averaging nearly seven yards a carry and collecting four scores.  And linebacker Micole Shorty led a stingy defense that was giving up just over ten points a game.

Coconino was no slouch on offense themselves, scoring 25 points a game and preaching a balanced attack, led by runningbacks David Trueblood and Jay Cox.  QB Robert Pulido provided senior leadership, completing 61 of 135 passes for 936 yards and six touchdowns, three to flanker Terry Mahan.  The Panther defensive game plan, however, revolved around stopping Gill, plain and simple; he gained 44 yards in the 1979 game and 86 in '80, both Eagle victories.

With a lot on the line and a packed Skydome, the game promised to be another classic.

THE GAME:  Flag High surprised no one in running the ball almost exclusively, daring the Panthers

to stop them; they ran the ball 47 times versus just three passes.  Even so, the first quarter went scoreless, neither team able to move the ball against the stingy defenses.  The Eagles got their first big break of the game, however, when Shorty picked off Pulido late in the quarter, setting the Eagles up on the Coconino 31.  Gill ran it in from 13 yards out, but with a missed conversion, Flag High led 6-0 early in the second.  Coconino showed signs of offensive life throughout the first half, but never mustered enough of a drive to threaten to score.  The Eagles put together one more drive in the quarter, assisted by key Panther penalties (a late hit and a facemask), and with 1:05 left before halftime, Matt Rees plunged in from two yards out.  Gill made the two-point conversion, putting the Eagles up 14-zip at the break. 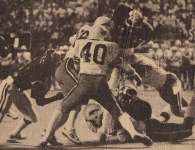 The Panther faithful weren't giving up just yet, as their side of the Dome went nuts when Eagle punter Rob Perry couldn't handle a high snap, and the Cats took over on the Eagle 21 with 9:50 left in the third.  Excitement, however, gave way to frustration, as the Panthers couldn't get much closer and had to settle for a 35-yard Herik Mandel field goal.  Flag High threatened to put the game out of reach later in the quarter, driving deep into Panther territory, only for linebacker Lanny Helberg to pick off Hickman in the end zone.  From that point on, the Eagle defense kept the Panthers in check, never allowing their offense to get in sync, sacking Pulido on a fourth-and-long in the final minutes to seal the deal. 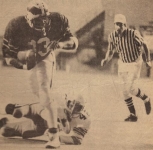 Gill finished the game with 139 yards rushing, Cullen had 75, and the Eagles collectively ran for 211 yards.  They outgained the Panthers 212-108 in total offense.  Each side committed only one turnover, and neither team was overwhelmed by penalties; the difference was, Panther mistakes cost them, as Pulido's interception led directly to the Eagles' first score, and crucial penalties set up their second. 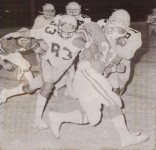 AT THE END OF THE DAY:  By virtue of tonight's win, Flag High was crowned AA North

champions and hosted Cactus in the first round; Coconino finished second and had to travel to Kingman, where they lost 14-7.  The Eagles beat the Cobras, 41-28, and then Corona Del Sol the next week, 42-30.  Meanwhile, Gill continued his assault on the school and state record books, collecting 294 yards and four touchdowns against Cactus and 217 yards and five scores against

CDS.  They faced Gilbert in the state final at Dobson High in Mesa, and though the Tigers, like every other team in Arizona, were geared up to stop Gill, the senior gutted out 31 carries for 101 yards and two touchdowns, including the go-ahead score in the third quarter.  That tough Eagle D stymied the Tigers in the fourth quarter, killing two drives that ended in missed field goals.  Final score:  Flagstaff 15, Gilbert 12.

It was the Eagles' first undisputed state championship in their history.

Stan Gill finished 1981 with an astonishing 2,110 yards (at the time, the third highest total in Arizona history) and 35 touchdowns (also third best); he concluded his high school career with 4,372 yards (fifth best to date) and 60 touchdowns (tied for third).  The next season, he traded in his Eagle Green for Cardinal Red as he accepted a scholarship to Stanford.

On a somber note, Flag High captain Micole Shorty seriously injured his neck during a wrestling match not long after the championship game.  Though his athletic career ended with that injury, Shorty led a productive life, working in the county building for many years and running for City Council.  He died in 2010. 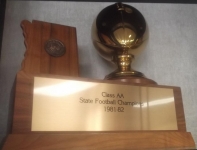 Original story by Randy Howard of the Daily Sun;