LEADING IN:  By 1980, both programs were perennially at the top of the AA North standings and posturing for playoff runs by the time the Rivalry Game rolled around.  Though both teams started the new decade with new head coaches, the result was the same, and the Eagles and Panthers were vying for city bragging rights, the division title, and a leg up in the upcoming postseason.

Steve Maier took the reigns of the Panthers in the absence of patriarch Bill Epperson.  He had a tough act to follow, taking over for the only head coach the Panthers ever had, a man who led the Panthers to three state titles.  He was no stranger to Coconino, having worked in Epperson’s system for years.  Unlike Panthers of the past, this year’s edition was more pass-oriented, guided by Randy McKee, who combined arm strength with scrambling ability, and Bill Black, the Panthers’ all-time-leading receiver.  After struggling early and hitting midseason with a 2-3 record (including a shocking 14-13 upset at Holbrook), they rattled off four wins in a row, hitting their stride for the Rivalry Game with a solid 37-13 win over Snowflake.

Rick Smith was also in his first year; like Maier, he was at home on the Eagles’ sidelines, having assisted Hadley Hicks and Larry Gray for years before getting his shot.  Behind the arm of Greg Topp, they could pass as well, but their primary weapon was junior tailback Stan Gill; he had slashed the competition for 1,374 yards and 18 touchdowns (gaining an outstanding 8.2 yards a carry) in nine games.

Flag High came into the game with a perfect 9-0 record (3-0 in division play) and ranked #1 in the state.  Beating the Panthers would assure them of their first undefeated regular season since the 1930’s and win them their first division title since joining the AA ranks in 1974.  The Panthers were 6-3, but they were also 3-0 in the AA North.  Coconino was the established power in the division and a contender for the title year in and year out, but Flag High was up-and-coming.  Had the Eagles arrived, could they now be considered among the AA elite?

THE GAME:  The tone for a hard-fought defensive war was set early in the game.  On the Panthers’ opening drive, McKee rolled left, pursued by a fierce Eagles rush, and threw a wobbly pass that landed in the hands of Flag High senior DB Kelly Cullen, who returned it 23 yards down the right sideline to the Coconino 3.  From there, Kelly’s brother, junior fullback Tony Cullen, pounded it in, and with Roger Teague’s extra point, the Eagles were already up, 7-0, with just two-and-a-half minutes played.

After trading punts, the next defensive highlight occurred.  With Coconino’s Terry Mahan set to punt it again, Flag High’s Randy Ethington blocked the kick, with Randy Perry recovering at the Coconino 30.  The Eagles were in business again, but the Panthers’ D stiffened, and on fourth-and-three on the Cats’ 24, instead of trying a 41-yard field goal, Coach Smith called for a run, giving the ball to the usually-reliable Gill.  The Panthers held Gill short.

Unable to score themselves, the Panthers stayed in the game with their own brand of stingy defense and Eagles’ miscues.  They gained momentum when Kelly Cullen bobbled a Mahan punt, and CHS’s Rick

Westling recovered on the Flag High 49.  Bill Black dropped a perfect McKee pass that would have put the Panthers in scoring position, which killed the opportunity.

For every Panther threat, however, the Eagles’ defense rose to the challenge.  Twice in the second quarter, Coconino drove deep.  First, after Gene Sanders recovered a fumble, the Panthers drove to

the Flag High 10, where Herik Mandel tried a 27-yard field goal that went wide right.  Later, gathered another Eagle fumble to jumpstart another Panther drive, with McKee guiding them to the FHS 5, but Matt Kendall hit him hard, jarring the ball loose for Tony Cullen to pounce on it.  It was hard hits and defensive heroism all over the field for both teams.

The second half played out pretty much like the first half; the Eagles got on the board quickly, then stymied every threat the Panthers could muster.  Topp threw a 27-yard bullet to Nathan Joe, setting up Gill for a scoring plunge from a yard out.

With another Teague kick, Flag High was up 14-0, but the Eagles paid for their lead, as Gill was nailed with a helmet to his hip, ending his evening with 86 yards rushing; though he had lost three fumbles, no harm came of it, as the Panthers couldn’t convert any of them into points.

McKee revved the Coconino offensive machine again, hitting Marty Hannah over the middle for 28 yards.  The duo connected again for 13 more, but at the Flag High 14, Tony Cullen unleashed a ferocious hit on Hannah, separating the receiver from the ball.  Teague recovered the fumble, ending yet another Panther threat.

From that point on, the Eagles’ D took over and simply would not let Coconino do anything else on offense.  McKee threw three more interceptions (four total), Nathan Joe catching one and Matt Kendall grabbing two as the Panther QB heaved more desperately as the game 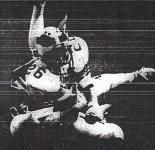 wound down.  Micole Shorty added a fumble recovery.  All told, the Panthers turned the ball over six times.  Truly, Flag High’s offense was hardly better, suffering four turnovers of their own, but they were just opportunistic enough on offense to get on the board when it mattered, and they simply smothered the Panthers on defense.

AT THE END OF THE DAY:  Flag High completed their regular season with a perfect 10-0 record, ranked #1 in the state, and hosted Kingman the next week; the two teams played just a few weeks before, with the Eagles winning soundly.  Coconino dropped to 6-4 and were on the road to face the AA West champion, Cactus; it was the first time the two schools ever played each other.

Coconino was hanging tough against Cactus in the first half, going into halftime with a 13-12 lead; two McKee passes, one to Hannah and one to Black, constituted the Panthers’ scores.  But in the second half, the Cobras got their running game going, and the Panthers could do nothing to slow it down.  They scored touchdowns on each of their first four possessions after intermission.  In all, Cactus ran up 434 rushing yards on the cherished Panthers’ D as they won, 38-13.

The big question all week for Flag High was, would Stan Gill play, after suffering a hip pointer that knocked him out of the Rivalry Game?  Against Kingman, yes, he suited up and ran for 89 yards.  But it was the combination of Topp’s passing (he completed nine of his 18 passes for 132 yards and two touchdowns) and their always opportunistic defense (Matt Kendall snatched an interception and raced 97 yards for a score) that led the Eagles past the Bulldogs, 27-15.

The next challenge for the Eagles was at ’s Westwood High, where they met the Corona del Sol Aztecs.  They started off well, opening the scoring with a two-yard Gill run.  Their enthusiasm, though, was curbed, as CDS speedster Glenn Dennard ran a reverse for a thrilling 87-yard touchdown; the Aztecs missed the conversion, maintaining the Eagles’ lead at 7-6.  The Eagles ended the half the way they started it, with a short run for a touchdown, this time Topp calling his own number from a yard out, and the Eagles went to halftime, up 13-9.  Midway through the third quarter, the Eagles faced a fourth-and-nine on the Aztec 44; Coach Smith gambled and lost, as Topp was sacked for a huge loss.  The momentum shifted at this point, as CDS would convert this into a touchdown, an 11-yard pass from Mike Hold to tight end Guy Logan.  Hold and would hook up for one more score, in the fourth quarter, to make the final score 22-13.

The Eagles finished 1980 with an 11-1 record, one of the best in their history, but the playoff loss left a bitter taste in their mouths.  If there was a silver lining in all this, it was that the Eagles were a team full of juniors that would learn from this, including Stan Gill, who finished the year with 1,646 yards rushing. 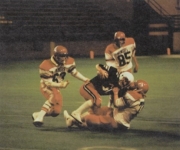 Original article by Jim Fossom of the Daily Sun;